History of the Juggling Poll Hat

The first juggling hat sold by Renegade Juggling (1985) was called the Mad Hatter, a tall top hat made by Dorfman a costume a hat-making company. The hat was made from a heavily starched, single layer felt (see photo). At the time, it was the only commercially available model heavy enough to be suitable for juggling acts. The derby hats back then were too light for juggling.

In the 1990s, Nils Poll (one of the best jugglers using a mad hatter hat) found a very old hat-making company in Denmark that had a vast collection of wood hat-making forms. Nils came up with the idea of making a derby-style hat that used several layers of felt inside each other and would be heavy enough for juggling. Since the Danish hat maker had variously sized patterns, they could put three hats inside each other to make one extra thick hat. Another innovation was to make the hat round by alternating the direction of the oval layers sewn together.  A round hat will fit on your head in all orientations so it is much better for juggling. In addition, a plastic ribbon was sewn into the outside edge of the brim to give it more stiffness.

During a juggling festival in Denmark shortly after Nils made his first Danish hats, Renegade Juggling visited this hat shop and submitted the first commercial order for the Nils Poll triple-felt juggling hat. Renegade Juggling went on to develop three more juggling hats all in triple layers of felt: the Pork Pie, the Dick Tracy and the Top Hat. Several years later, we came out with the Cone Head clown hat, which is not made for juggling however. These hats, of which the triple-felt derby became the most popular, are called Poll hats and would later be copied by other makers. Renegade Juggling still sells the original hat that is still made at the same factory in Denmark (the Dick Tracy model is no longer available).

How to Size a Juggling Hat

Since all good quality juggling hats are made by hand and sized in metric measurements, choosing the right size of hat is complicated. First, there can be considerable variation within a batch of hats even though they are all made to be the same size. Second, peoples heads are oval, but the hats are made round so that they fit in all directions. To figure out the size you need without actually trying them on is difficult.

All good quality hats are now made in Europe or Bolivia and because of that, the sizing is always in metric. The most accurate way to measure a hat is by the circumference and not the diameter as is done in the US (7, 7 1/2 etc.).

To get a proper measurement of your head size in metric, tape three sheets of printer paper on end. Then fold this length of paper into a 2-inch strip (see photo below) and fashion it into a round headband. Adjust it so that you can put two fingers between it and your head, and tape the strip ends together. For a good fit, the hat band should be a little oversized for hat juggling, but not fall over your ears. Once you have a proper fit, cut the band and measure the length with a metric tape measure. This length in centimeters is the size of the hat. Renegade sells hats sized at 61, 59 and 58 cm; however, since sizes range slightly due to being handmade, actual sizes may vary between 62.5 and 56 cm. When you place an order, please always include the actual measured dimension of your head. This way we can select a hat that will fit you best.

Some hat jugglers prefer to get an oversized hat and put round piece of foam inside the crown of the hat. This foam is thick enough that it allows the hat to sit on top of your head and not fall over your ears. The foam must be wide enough to stay press fit into the hat. This is good option if you are just going to be using the hat for manipulation as it is easer for head catches. The downside it is too loose of fit if you plan to wear the hat, outside of a juggling routine.

How to measure head band for juggling hat fit 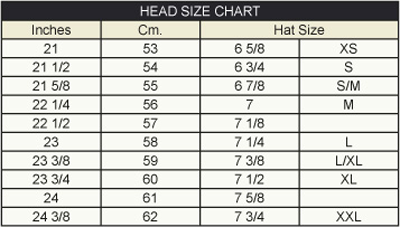 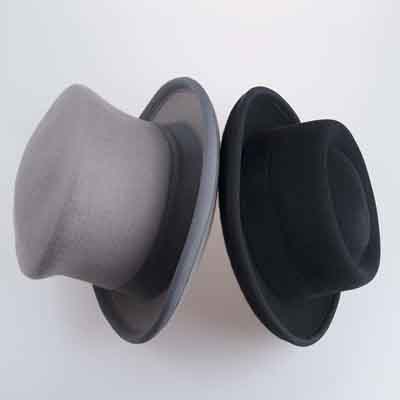 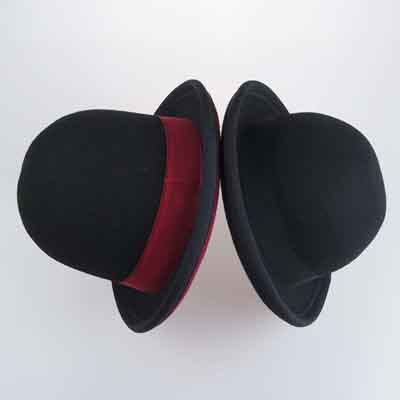 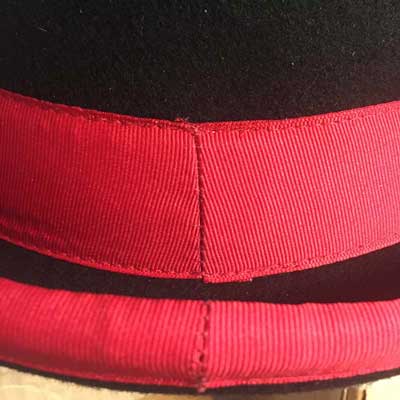 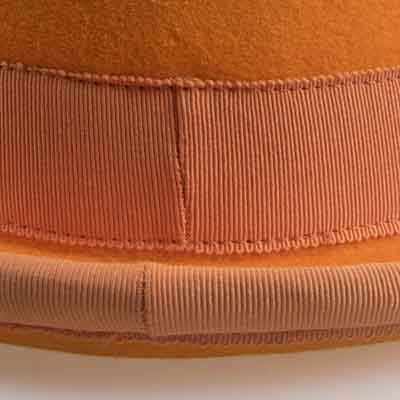 Original Poll Hat Made in Denmark

The simple answer is you cannot clean it. Felt is made of wool. If you wash the hat and it gets totally wet with soapy water, it would shrink significantly upon drying and become unusable. Cleaning a felt hat is generally limited to removing dry dirt and dust with a handheld vacuum cleaner and a brush attachment, although this will not take off grease or stains. For this reason, it is best to get a black hat if you are learning hat juggling.

Besides getting dirty from frequent dropping, a juggling hat becomes worn out when the brim becomes too floppy. The only way we know to stiffen the hat brim is to apply tool dip to the inside/outside of the brim. Tool dip is a vinyl liquid used to coat tool handles and is available at any big hardware store. Coat the inside of the brim with several light coatings, letting the coating dry between applications. If needed, repeat this procedure on the outside of the brim. This will stiffen it without shrinking the wool. However, the hat will not look pretty, even if you use black, red or yellow (the only available tool dip colors). Some people also use spray starch normally intended for shirt collars, but this does not work nearly as well as tool dip.

Another style of hat juggling uses flying hats that are made to be thrown like a frisbee. When you throw the hat into the air, it floats back to you and it is also possible to have several hats in the air at the same time. We sell Mexican flying hats, which are handwoven in Mexico out of plastic fibers. A traditional Panama hat (made from toquilla palm leaves) is too heavy for gliding purposes. Flying hats need to be very lightweight to function correctly. With our Mexican flying hats, you can adjust the distance the hat flies by adding weight to the outside edge of the brim. If you fold and add a single layer of 3/4 inch electrical tape on the outside edge of the brim, you can increase the flight distance. You can add up to three layers of tape depending on how far you want it to go. You can also sew fabric on to the edge of the hat to get the same effect. Polyester seam reinforcement tape works well, too.

Making Your Own Juggling Hat

If you would like to convert a normal store-bought felt hat into a juggling hat, it can be done in several ways. The primary problems you will probably face are: the total weight is too light and the hat brim is too flexible. You can buy several hats and put them inside of each other using the same principle as the triple-felt hat. This can end up being very costly as you need two or three hats to make one. A better solution is to incorporate and hoop (loop?) garden hose rolled into the brim of the hat. If your hat has a wide enough brim width, you can roll the brim around the hose. Along the same lines, you can incorporate a flat plastic ring (like a juggling ring) into the brim. A hose hat is great for juggling but your hat will most likely have a Chico Marx look. Another way to make your own hat is to buy 3 hats in three sizes and put them inside of each other and sew the brim, but usually it is cheaper to just buy a juggling hat, unless you can find used hats that would work.