How to Select a Juggling Ring

A juggling ring can be made from many different materials including wood, cloth, and plastic. Early ring juggling was performed using wooden hoops or plate-like disks. Continuing to use wood as a medium, jugglers modified these shapes into flat rings in the 1930s which could be wrapped in cloth or painted. This breakthrough in shape, along with the commercial development of plastic around 1945, led to the first flat juggling rings made from sheet plastic. As plastic production costs decreased in the 1970s, new manufacturing processes such as injection molding allowed further enhancement of the juggling rings features. Today, all flat plastic juggling rings are injection molded or cut using a CNC water jet to produce precise shapes with tight tolerances.

In 1992, Renegade Juggling introduced the first hollow plastic juggling rings, using a rotational molding process. As a hollow adaptation of the flat ring, they featured a range of thicknesses, from one inch to one half inch thick models. These rings were molded in house by Renegade Juggling using specialized equipment.

This article reviews the most common types, sizes, and uses of juggling rings in order to help you make the best selection for your style of juggling and juggling ability.

Traditional flat plastic juggling rings (photo above) are all made roughly the same size, featuring a 12.75 inch (32cm) diameter and an 1/8 th inch thickness (photo top right). The size of this ring was arbitrarily modeled after the size of a biscuit tin lid. This size quickly became the standard and was used by most of the juggling community. The next size produced was a larger flat ring, 15.75 inches in diameter (photo top left), again an arbitrary value. A smaller ring with a 9.5 inch diameter (bottom photo) was also created, so that it could be used by children. While this made sense in theory, it turned out to be a failure as it is actually much more difficult to juggle compared to the larger 12.75 inch ring. However, production of this size ring is less expensive, and still used for children despite the fact that it is very hard to juggle.

The weight of the flat plastic ring is a critical aspect, as catching this narrow-shaped hard plastic with your hands can be very painful. It has been found that if the ring has a weight over 120 grams it can easily hurt your hands, which is a major down side of the larger 15.75 inch flat ring, with a weight between 140-150 grams. 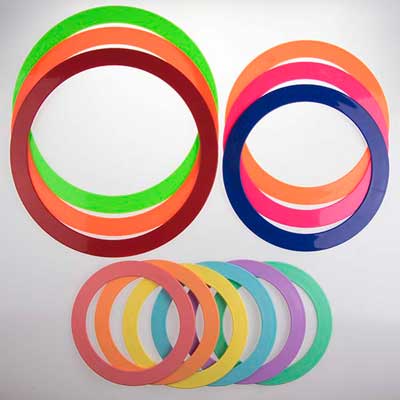 How To Catch And Throw A Flat Juggling Ring

A flat ring can be very hard on your hands. Due to its narrow edge, when thrown high in the air the ring lands with a high amount of force concentrated on a small area of your hand. In order to not hurt your hands, you need to catch the ring on the palm side of the pointing finger knuckle (photo below) and not in the web between your thumb and pointing finger.

This upper palm catch can be difficult to get used to at first and requires that you slowly increase the amount of time you juggle the rings. Experienced ring jugglers develop a callus where the ring hits their hand from practicing so often. It takes time for this callus to form so you need to be patient; over-practicing with flat rings is not recommended due to the risk of damaging your hands. For juggling three flat rings, the callus is not as important because the rings are not thrown very high. However, when you are trying to juggle 5-9 rings it becomes extremely important. Keeping your hands in good condition for numbers ring juggling requires that they are moisturized to avoid cold cracks of the callus which can occur if your hands become too dry. One of the most common products jugglers use to prevent cracking is Burt’s Bees Hand Salve, generally applied once a day.

Most numbers jugglers separate the rings between their fingers. By separating the rings you can more closely control the release of the rings out of your hand. Releasing the rings when they are stacked in your hand is much more difficult, but can be done with thicker, hollow rings or hoops. For large numbers of rings, it is common to see the juggler have the last rings attached to a belt on their side.

The flat ring is best suited for jugglers who plan to use 5 rings or more for numbers juggling. In this case the ring size should be 12.75 inches (32cm) and have a weight of 100 grams. The larger size flat ring of 40 cm is best suited for juggling less than 5 rings, but is optimized for 3-ring juggling. The small ring of 24 cm can be used as a combination ring with other sizes for mixed- size juggling. Flat rings are not well suited for beginner ring jugglers and are not recommended for children. The flat ring is also not recommended for ring passing. 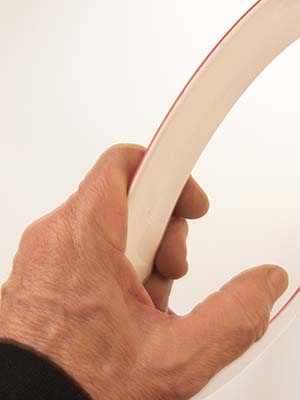 Round hollow rings are made in four sizes. One of these is called the passing ring, which is one inch thick, and made for passing between people. The thickness of the ring makes it easy to see when it is being passed between jugglers, and the wider width helps to spread out the force of the ring on your hands so it is less painful when you catch it. While you can catch this juggling ring with any part of your hand, a heel catch is still best (see photo above hollow rings photo). This type of ring is very good for those who are new to ring juggling. 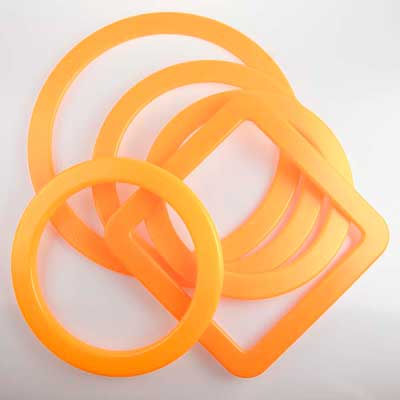 The hollow ring is best suited for jugglers who plan to use them for solo juggling 5 rings or less and ring passing. These are the best rings for beginners, with the 14-inch ring size being the easiest to start with. The 15- and 19-inch rings are primarily used for ring passing, but the 19-inch rings can also be used for 3-ring juggling as well as leg and arm spinning. The 14-inch diameter by 1-inch wide rings are best suited for beginning ring passing and bounce juggling.

In collaboration with Renegadesinglab (RdL), Renegade Juggling designed and manufactured the first isolation rings made of flat plastic and in various shapes and sizes for different types of ring manipulation moves. RdL was a key experimental juggling lab, most active from 2005-2012. They produced many new juggling products, including cup head clubs, J-clubs, eight rings, isolation rings, and other ring shapes. However, after the death in 2012 of Luke Wilson, a founder and one of the driving forces behind the new shapes, RdL no longer remained active. 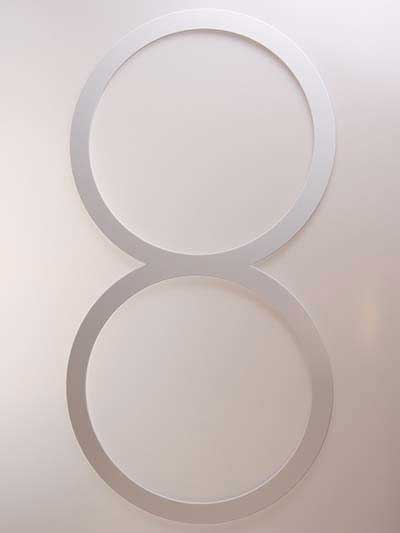 Eight rings can be difficult to learn; however, experience with single ring isolation or ball isolation creates a strong foundation to build off of. It should be noted that the ideal ring varies from person to person based on their body size. Typically, an average sized adult will opt for the Skinny Eight, as it is lighter than the Standard Eight ring. The Baby Eight ring is optimal for small adults or children who would find the Skinny Eight ring too heavy. The Standard Eight ring is excellent for any advanced player or large adult 6 feet tall or more. The odd shaped eight rings, like the eight ball, spice up your game and are geared towards advanced players.

To learn isolations, the best ring to start with is the double isolation ring or a small hula hoop. Although more advanced, the triple isolation ring can be a great starting point for ambitious learners. These rings are a perfect first prop, especially for jugglers who want to learn how to manipulate the eight ring.

A track ring is made for spinning a ball inside a ring or rolling a ball outside of it. This juggling trick has been around for ages; specifically, the track rings are mounted on a pole and balanced. While balanced, the juggler bobs up and down to make the ball spin around the inside of the ring. Obviously, this prop is harder to learn than you would think. If you are using the ring in your hands, the larger size ring (19") is better. For the pole-mounted track ring, the smaller sized ring is better.

The track ring has also been used as a balance prop, where you balance a glass of water inside the ring and spin it around without any liquid coming out of the glass. Track rings are unique because although there are a wide variety of tricks you can do, many of the tricks are not documented and force the juggler to create them on their own. 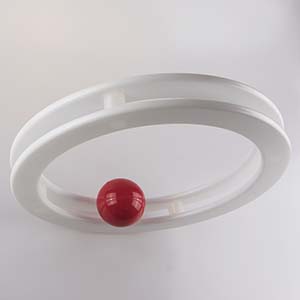 Although the 1-inch-thick Renegade Passing ring is not typically used as a bouncing ring, many have found it an interesting and fun prop for that application. Different uses include bounce passing the ring to a partner or simply using it solo. Toss and bounce juggling are a great combination when solo juggling.

Leg and arm spinning rings need to have a large diameter of at least 15". Renegade makes two different ring models for this type of trick: a large 20" flat ring or a 19" hollow stage ring. For spinning, the stage ring is made heavier than normal, weighing around 200 grams (the normal stage ring weighs 140 grams). Jugglers have been known to tape two 15" flat rings together to make them heavy enough for spinning, but this is not needed with the stage ring. Another type of ring spinning involves spinning a ring inside of another ring held parallel to the ground. The rings need be heavy for this to work and often times the best rings are made at home out of varnished plywood. No rings like this are commercially produced. 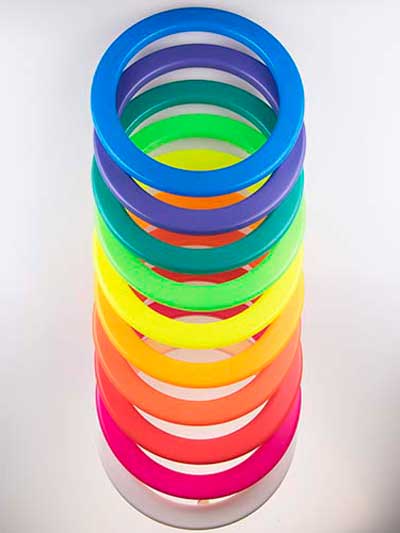 Another form of ring juggling is hoop rolling and juggling. This type of juggling was originally performed using wooden bicycle rims, where the edge was in contact with a floor covered in tape (for traction). There have been several modern renditions of this type of ring. Renegade Juggling sells a nylon ring intended for this use. As it is much heavier than wood, the nylon ring handles differently. Theoretically, the best alternative to a wooden ring would be a carbon fiber bicycle rim, although this concept has not been developed yet.